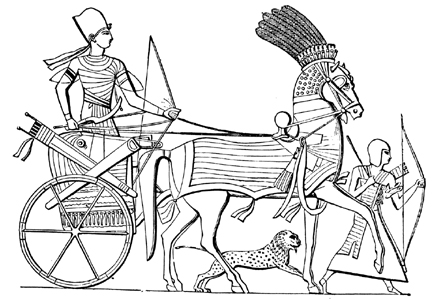 Before the New Kingdom the Egyptian armies were composed of conscripted peasants and artisans, who would then mass under the banner of the pharaoh. During the Old and Middle Kingdom Egyptian armies were very basic. The Egyptian soldiers carried a simple armament consisting of a spear with a copper spearhead and a large wooden shield covered by leather hides. A stone mace was also carried in the Archaic period, though later this weapon was probably only in ceremonial use, and was replaced with the bronze battle axe. The spearmen were supported by archers carrying a simple curved bow and arrows with arrowheads made of flint or copper. No armor was used during the 3rd and early 2nd Millennium BC. Foreigners were also incorporated into the army, Nubians (Medjay), entered Egyptian armies as mercenaries and formed the best archery units

The major advance in weapons technology and warfare began around 1600 BC when the Egyptians fought and finally defeated the Hyksos people who had made themselves lords of Lower Egypt. It was during this period the horse and chariot were introduced into Egypt, which the Egyptians had no answer to until they introduced their own version of the war chariot at the beginning of the 18th Dynasty. The Egyptians then improved the design of the chariot to suit their own requirements. That made the Egyptian chariots lighter and faster than those of other major powers in the Middle East. Egyptian war chariots were manned by a driver holding a whip and the reigns and a fighter, generally wielding a composite bow or, after spending all his arrows, a short spear of which he had a few. The charioteers wore occasionally scale armour, but many preferred broad leather bands crossed over the chest or carried a shield. Their torso was thus more or less protected, while the lower body was shielded by the chariot itself. The pharaohs often wore scale armour with inlaid semi-precious stones, which offered better protection, the stones being harder than the metal used for arrow tips. The principal weapon of the Egyptian army was the bow and arrow; it was transformed into a formidable weapon with the introduction by the Hyksos of the composite bow. These bows, combined with the war chariot, enabled the Egyptian army to attack quickly and from a distance. Other new technologies included the khopesh, which temple scenes show being presented to the king by the gods with a promise of victory, body armour, in the 19th Dynasty soldiers began wearing leather or cloth tunics with metal scale coverings, and improved bronze casting. Their presence also caused changes in the role of the military in Egyptian society and so during the New Kingdom, the Egyptian military changed from levy troops into a firm organization of professional soldiers. Conquests of foreign territories, like Nubia, required a permanent force to be garrisoned abroad. The encounter with other powerful Near Eastern kingdoms like Mitanni, the Hittites, and later the Assyrians and Babylonians, made it necessary for the Egyptians to conduct campaigns far from home. The next leap forwards came in the Late Period (712-332 BC), when mounted troops and weapons made of iron came into use. After the conquest by Alexander the Great, Egypt was heavily hellenised and the main military force became the infantry phalanx. The ancient Egyptians were not great innovators in weapons technology, and most weapons technology innovation came from Western Asia and the Greek world.

As early as the Old Kingdom (c.2686-2160 BC) Egypt used specific military units, with military hierarchy appearing in the Middle Kingdom (c.2055-1650 BC). By the New Kingdom (c.1550-1069 BC), the Egyptian military consisted of three major branches: the infantry, the chariotry, and the navy

Chariotry was introduced into ancient Egypt from Western Asia at the end of the Second Intermediate Period (c.1650-1550 BC) / the beginning of the New Kingdom (c.1550-1069 BC).Charioteers were drawn from the upper classes in Egypt. Chariots were generally used as a mobile platform from which to use projectile weapons, and were generally pulled by two horses and manned by two charioteers: a driver who carried a shield, and a man with a bow or javelin. Chariots also had infantry support.

Before the New Kingdom, the Egyptian military was mainly aquatic, and the high ranks were composed of the elite middle class. Egyptian troops were transported by naval vessels as early as the Late Old Kingdom. By the later intermediate period, the navy was highly sophisticated, and used complicated naval maneuvers, e.g. Kamose’s campaign against the Hyksos in the harbor of Avaris (c.1555-1550 BC).

Projectile weapons were used by the ancient Egyptian army, as well as other period military, as standoff weapons, usually used in order to soften up the enemy prior to an infantry assault. At various times during Egypt’s history, different weapons were used, including throw sticks, spears or javelins, bows and arrows and slingshots. Of these, certainly the bow and arrow became the primary projectile weapon for most of Egypt’s history, and yet, all of these weapons continued in some use almost throughout the Dynastic period.

The throw stick does appear to have been used to some extent during Egypt’s predynastic period as a weapon, but it seems to have not been very effective for this purpose. Yet, because of their simplicity, skilled infantry continued to use this weapon at least with some regularity through the end of the New Kingdom. It was used extensively for hunting fowl through much of Egypt’s dynastic period.

The spear does not fit comfortably into either the close combat class or the projectile type of weapons. It could be either. During the Old and Middle Kingdom of Egypt’s Dynastic period, it typically consisted of a pointed blade made of copper or flint that was attached to a long wooden shaft by a tang. Conventional spears were made for throwing or thrusting, but there was also a form of spear (halberd) which was fitted with an axe blade and thus used for cutting and slashing. The spear was used in Egypt since the earliest times for hunting larger animals, such as lions. In its form of javelin (throwing spears) it was displaced early on by the bow and arrow. Because of its greater weight, the spear was better at penetration than the arrow, but in a region where armor consisted mostly of shields, this was only a slight advantage. On the other hand, arrows were much easier to mass produce.

In war it never gained the importance among Egyptians which it was to have in classical Greece, where phalanxes of spear carrying citizens fought each other. During the New Kingdom it was often an auxiliary weapon of the charioteers, who were thus not left unarmed after spending all their arrows. It was also most useful in their hands when they chased down fleeing enemies stabbing them in their backs.

The spear was appreciated enough to be depicted in the hands of Ramesses III killing a Libyan. It remained short and javelin like, just about the height of a man, unlike the Macedonian lance of later times which was three to four times as long.

The bow and arrow is one of ancient Egypt’s most crucial weapons, used from Predynastic times through the end of the Pharaonic period, and of course, much later into the Christian and archaic Islamic periods. Some of the first bows that we know of were the “horn bows”, made by joining a pair of antelope horns by a central piece of wood, which were common.

By the beginning of the Dynastic Period, we find bows that had a single curvature and were made of wood and strung with sinews or strings made of plant fiber. In the pre-dynastic period bows frequently had a double curvature, but during the Old Kingdom a single-arched bow, known as a self (or simple) bow, was adopted. These were used to fire reed arrows fletched with three feathers and tipped with flint or hardwood, and later, bronze points. The bow itself was usually between one and two meters in length and made up of a wooden rod, narrowing at either end. Some of the longer self bows were strengthened at certain points by binding the wooden rod with cord. Drawing a single-arched bow was harder and one lost the advantage of draw-length double curvature provided.

During the New Kingdom the composite bow came into use, having been introduced by the Asiatic Hyksos. Often the bows were not made in Egypt itself but imported from the Middle East, as was the case with other ‘modern’ weapons. The older, single-curved bow was not completely abandoned, however. For example, it would appear that Tuthmosis III and Amenhotep II continued to use the earlier style bows. A difficult weapon to use successfully, it demanded strength, dexterity and years of practice and the experienced soldier chose his weapon with care.

Hurling stones with the help of a slingshot demanded little equipment but considerable practice in order to be effective. Secondary to the bow and arrow in battle, the slingshot was rarely depicted. The first drawings date to the 20th century BC. Made of perishable materials, few ancient slingshots have survived. It relied on the impact the missile made and like most impact weapons was relegated to play a subsidiary role. In the hands of lightly armed skirmishers it was used to distract the attention of the enemy. One of its main advantages was the easy availability of ammunition in many locations. When lead became more widely available during the Late Period, sling bullets were cast. These were preferred to pebbles because of their greater weight which made them more effective. They often bore a mark.